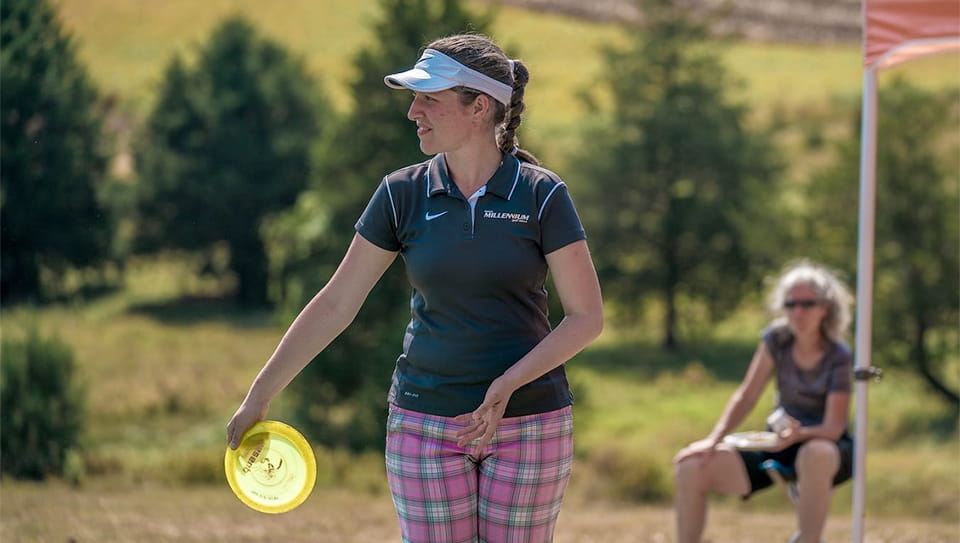 Michelle’s Bio:
When I was 12 years old, I played my first PDGA tournament—the 2004 United States Women’s National Championship—putting with a Millennium Omega putter which was white with purple writing. I enjoyed growing up playing disc golf with my family, and as my game improved, I thought, maybe someday I’ll get good enough to turn pro and be sponsored by Millennium. Sometimes weird childhood dreams come true. 🙂

It took a while, though, as I have always been busy as a student. While in undergrad, I won the 2012 Amateur World Championships, but it was not until I started grad school that I found the time to play enough to take my game up another notch. I study Atmospheric and Oceanic Sciences (translation: I work with climate models and love clouds) at Princeton University. In 2016, I became a Ph.D. candidate and joined Team Millennium! I am extremely grateful to Millennium for supporting my pursuit of the sport I enjoy for competition, camaraderie, and just being outdoors (under the clouds!).

For over a decade, my most-thrown disc has been the Omega SuperSoft —I have always counted on its superior grip for putting as well as its ability to hold any approach line. My favorite aspect of Millennium’s portfolio is a wide selection of quality finesse drivers. I currently use the Polaris LS, JLS, Aquarius, and Aries for accurate lines of various shot shapes. When I received a Zero-G Quasar as a prize few years ago, I tried it simply because of its cool name (I am a science nerd). But soon, it became my favorite stable max distance driver due to its superior glide compared to its competitors. Both before and since I joined Team Millennium, quickly falling in love with new Millennium plastic I am exposed to has been a recurring pattern—one that I look forward to continuing to enjoy.